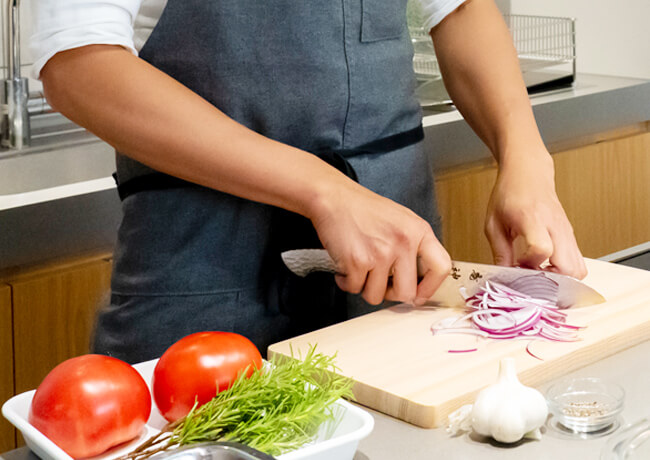 Ryujin knives originate from Tsubame-Sanjo, a region in Japan renowned for manufacturing of kitchen knives. Bringing 50 years of experience and exclusive techniques to the Ryujin operation, metalworking master Shosaku Motomiya creates premium knives with exceptional sharpness and non-stickiness.
The aim is to create a light kitchen knife, a natural extension of the hand, a blade that cuts as desired. Become a proud owner and enjoy stress-free, pleasurable food preparation with Ryujin, your partner in the kitchen. 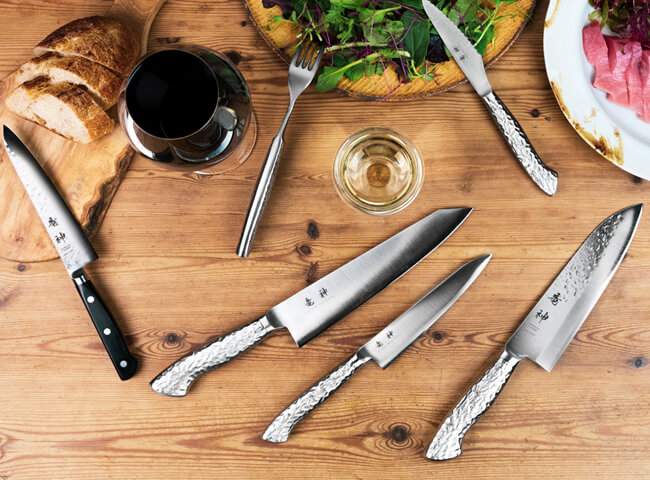 Owner and creator of Ryujin, Shosaku Motomiya sought a brand for his kitchen knives originating from Tsubame, the city where he was born and raised in Niigata Prefecture. He considered a name associated with Iyahiko Jinja, a historical shrine of Tsubame known affectionately by the locals as “Oyahiko-Sama.”
Ame-no-Kaguyama-no-Mikoto, the enshrined god at Iyahiko Jinja is the grandson of Amaterasu-Omikami, the sun goddess. In the past when Ame-no-Kaguyama-no-Mikoto came down from the heavens and resided in Kumano, in the southeastern part of the Kii Peninsula, Emperor Jinmu and the imperial warriors fell into a deep sleep from venomous mist issued by the enemy. Through a dream, Ame-no-Kaguyama-no-Mikoto was ordered by higher gods to bestow the Futsu-no-Mitama-no-Mitsurugi, a mystical sword, to Emperor Jinmu. This powerful sword previously enabled subjugation of the nation by Take-Michizuka, the god of thunder, and on this occasion awoke Emperor Jinmu and his retinue, who promptly defeated the enemy. Emperor Jinmu continued to campaign successfully against many adversaries and reached Yamato, where he was crowned the nation’s first emperor at Kashiharanomiya.
The sword Futsu-no-Mitama-no-Mitsurugi represented the source of the soul for the kitchen knife Shosaku Motomiya wanted to create, but the name was too long for a brand. Legends speak of Emperor Jinmu having dragon scales on his body, while the Emperor’s daughter Tamayorihime was a god of the seas. The soul of Emperor Jinmu’s sword, therefore, is the heritage to the brand name “dragon god,” or in Japanese, Ryujin. The master’s creations under the brand name Ryujin relate the soul of the sword Futsu-no-Mitama-no-Mitsurugi.

Ryujin Loved by Lovers of Cooking 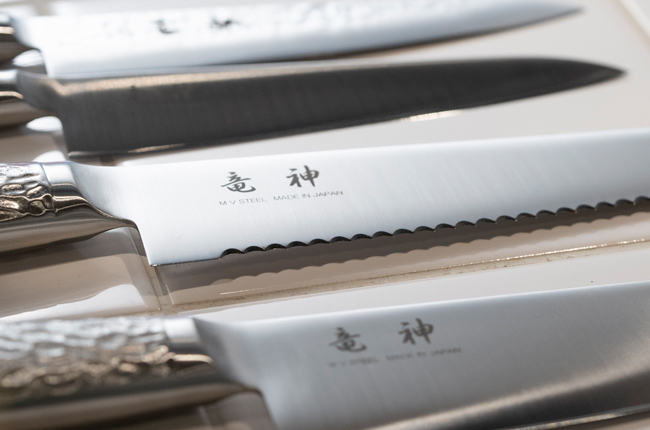 Ryujin is your life-long partner whenever you prepare food. This guide describes care to ensure life-long usage for your knives.
Maintaining a sharp edge is a requirement for better cooking. Form the habit of sharpening knives whenever they begin to lose their edge.
Sharpening may sound like a difficult task, but the secret is to practice and to simply make the effort right away. You can practice sharpening with any older kitchen knife no longer in use.
Sharpening devices are available, but these require frequent use to keep a blade sharp and are not recommended. Pour your love into a knife by sharpening with a whetstone.

A medium stone (around grit #1000) is generally the first stone to obtain for re-sharpening. Grit #400 is nearly a rough stone and grit #200 is nearly a finishing stone. Sharpening is quick with #400, but you can lose too much blade. Fine sharpening is possible with #2000, but it will take time. Grit #1000 is the intermediate option. 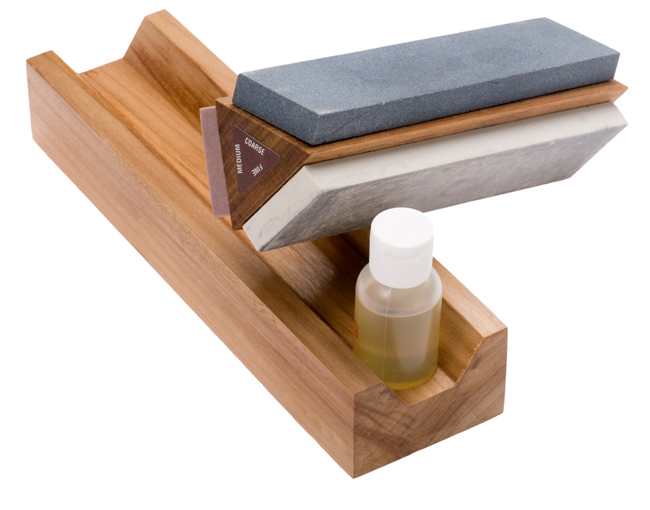 Stropping with Newspaper (approximately once a week) Note: Place an old newspaper on your workspace